Do you suffer from symptoms of any of the following:

The relief test could offer you great relief of your symptoms in under 10 minutes.

Join the thousands of others who now have a more fruitful life ahead of themselves and can now enjoy and experience life as it should be: PAIN FREE!!

As many as 18 million Americans suffer from fibromyalgia, a little-understood disorder that causes chronic, widespread pain and hypersensitivity to pressure. Its effects also go far beyond pain, to symptoms including fatigue, sleeplessness, difficulty in concentration, bowel and bladder problems and many others. For many, fibromyalgia syndrome can be debilitating.

The name fibromyalgia comes from the Latin and Greek root words fibro- (fibrous tissues), myo- (muscle) and algos- (pain) - meaning muscle and connective tissue pain. . The name is in fact a misnomer. Originally it described what was thought to be fibrous deposits in the muscles that caused pain. While it's true that some patients have muscle spasms so severe that they become fibrous, this has nothing to do with the cause of fibromyalgia.

In the past, fibromyalgia patients were often called hypochondriacs. Many times they were referred to psychiatrists, and it was not uncommon for sufferers to be institutionalized.

Only recently has fibromyalgia disorder gained recognition as a condition that deserves attention. In general, patients are receiving more respect today and are believed when they say they have a problem. But they may still be looked upon as drug addicts, or presumed to have a self-serving motive, when all they really need is someone to believe them and get them help.

Researchers estimate that fibromyalgia affects up to 6 percent of the population, with nine out of ten sufferers being women.

Medical practitioners don't know the cause of fibromyalgia, and while there has been an increasing amount of research over the past 30 years, there is little agreement on what fibromyalgia is and what to do about it. Aside from pressure tests - which themselves are disputed, there are no generally accepted, objective tests for fibromyalgia. In the end, most patients are diagnosed based on differentials - that is, a doctor reviews the history of symptoms and rules out better-known possibilities before determining that "fibromyalgia" is the best description.

Since the cause is unknown, there is no generally accepted treatment for fibromyalgia itself. Instead, doctors focus on relieving the symptoms, through a variety of medications, therapies and lifestyle changes.

Other conditions that are common among sufferers include: 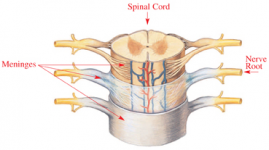 The meninges are a three-part sheath of membranes that, along with the cerebrospinal fluid, cover and protect the central nervous system. The Neurological Relief Centers have developed a system of therapy based on the idea that compression of the meninges - Meningeal Compression - explains fibromyalgia and a myriad of neurologic diseases and conditions.

The outermost part, closest to the skull, is a thick, durable membrane called the dura mater. Its two layers form the outermost meningeal sac that covers the inner membranes and supports the larger blood vessels that carry blood from the brain back to the heart. The dura mater is attached to the skull and the bones that form the vertebral canal.

The middle membrane is called the arachnoid because of its spider-web structure. It serves to cushion the central nervous system.

The innermost membrane is the pia mater, a very thin, delicate envelope that is firmly attached to the surface of the brain and spinal cord. The space between the arachnoid and pia mater is filled with cerebrospinal fluid.

Meningeal Compression could be caused by an encroachment or twisting on the three-membrane protective covering of the spinal cord and brain, called the meninges.

This intrusion might be from a tumor or other malformation, but we find that it is most often caused by a change in the cervical spine, which can reduce or distort the space through which the spinal cord and meninges must pass.

Any tugging on the meninges can have devastating effects on this critical and sensitive nerve action, which in turn can produce a galaxy of undesirable symptoms.

Nerve roots are extensions of the spinal cord that turn and exit between each vertebra, sending and receiving impulses that control virtually the entire body, even the smallest parts. Since these nerves pass through the meninges, naturally it follows that every bodily system can be affected by the pulling of the meninges. These nerve roots also extend fibers to the brain, which transmit impulses that are then received as pain, burning, itching, hot, cold, tingling, or numbness, as well as other parasthesias (that is, odd feelings).

The pulling and irritation of these nerve roots cause nerve fibers to fire maverick impulses to the brain. The brain interprets these fired impulses as pain, itching, burning, coldness, numbness, or other odd feelings. The body, in response to stimuli from irritation, will often twitch or spasm, thus prompting the restless leg syndrome, muscle tightness, and spasms often experienced by fibromyalgia patients.

Typically irritation of the nerve roots, when it hits levels that are diagnosed as fibromyalgia, bombards the sufferer's brain, overwhelming the autonomic and sensory pathways, keeping them in pain, awake at night, fatigued, and depressed.

The symptoms of possible Meningeal Compression may vary from person to person. They may be debilitating - as in a severe case of RSD or Fibromyalgia - or be less severe in a milder case of fibromyalgia, mild facial pain or trigeminal neuralgia. Including the whole galaxy of symptoms would be impractical, because the nervous system controls the entire body and can affect all the systems. Here, then, is a partial list:

Our Technique for Relief of Neurological Symptoms

The Neurologic Relief Centers do not claim to treat fibromyalgia pain and other neurological symptoms. We are moving on the premise that it is a condition of the cervical spine causing an uncontrolled firing of the nervous system.

The aim of our technique is simply to reduce the CSF pressure and/or meningeal compression that causes the symptoms of neurologic disorders.

The uncontrolled firing of the nervous system does not always come about from the same misalignment in every person. This results in different manifestations in different individuals, who understandably must be treated accordingly.

Our procedure involves relieving the meningeal compression. It is a series of techniques that are applied at the appropriate times. Some of these are modifications of standard techniques and some we have developed.

Our objective is to free up the neurological structures that are being encroached upon, thus allowing the brain and spinal cord to return to normal function. In most cases, there is little or no pain associated with this procedure. Where there has been severe trauma and many years in which to develop arthritis in the neck, the treatments may take days or weeks to bring relief.

This is simply because it is in the nature of fibromyalgia and its causative mechanisms for the vertebrae to quickly return to the abnormal state where it has been for so long. And so it becomes of the utmost importance to hold the correction completely in place while the affected ligaments adjust and the body attempts to maintain this new position.

We have found that the longer the condition is present and the more severe the condition, the more intense the treatment needs to be.

Dos and Don'ts During and After Treatment

Make sure you keep twice-monthly Stabilization Care treatments and tell your Doctor if you have any returning symptoms.

If you are out of the area you will be assigned a Doctor in your area for Stabilization Care.

New Therapy May be the Answer to Sleep, Mood Disorders, and Chronic Fatigue

From 30 to 50 percent of adults experience insomnia or sleep disorders at some point, and an estimated 10 percent have chronic insomnia. The sleepless "epidemic" is reflected in the wide range of prescription and non-prescription sleep medicines and TV advertisements for cures.

A lack of sleep can be serious, leading to a lack of concentration, a higher rate of accidents, chronic fatigue and anxiety and mood disorders. Many of those suffering from fibromyalgia and other chronic pain disorders also suffer from lack of sleep or interrupted sleep.

While many things can cause insomnia - especially temporary bouts - one major cause is fibromyalgia and other chronic painful and debilitating conditions. The discomfort caused by the general pain, soft-tissue burning and tingling, and tender pressure points can interrupt or prevent restful sleep.

The Neurologic Relief Centers has developed a new approach to the understanding of the central nervous system that offers hope for a range of debilitating conditions.

The NRC says many such conditions are linked to Meningeal Compression, the encroachment or twisting of the three-membrane protective sheath of the spinal cord and brain, called the meninges. Most often, this is caused by an accident, trauma or stress.

"Any tugging on the meninges can have devastating effects on this critical and sensitive nerve action, which in turn can produce a galaxy of undesirable symptoms," says the NRC. Symptoms may include those diagnosed as fibromyalgia, reflex sympathetic dystrophy (RSD), irritable bowel syndrome, peripheral neuropathy, dystonia, restless leg syndrome, depression, chronic fatigue, anxiety and many more.

The pulling and irritation of these nerve roots cause nerve fibers to fire irregular impulses to the brain, the NRC says. These fired impulses are interpreted as pain, itching, burning, coldness, numbness, or other odd feelings. The body, in response to stimuli from irritation, will often twitch or spasm, sparking restless leg syndrome, muscle tightness, and spasms often experienced by fibromyalgia patients.

The Wade & Associates Neurological Relief Center has created a treatment procedure to address these issues. A free relief test often brings immediate relief to patients, and indicates whether long-term therapy will be of benefit to them.

Find us on the map

Send us an email